This lesson is part of the course Old-Time Fiddle with Bruce Molsky.
Get immediate access to this lesson and all of the lessons in this course when you subscribe.
Start Course
Browse Courses
Watch Course Introduction Video
About This Course
Get deep into the roots of Southern Appalachian old-time fiddling. Bruce breaks down the melody, bowing patterns, rhythms, and embellishments of each tune he teaches so you can really learn to play like Bruce and the old masters he learned from.
Try a Sample Lesson
GREASY COAT
West Virginia fiddler Edden Hammons was recorded in 1947 by a collector named Louis Chappell. Hammons’s playing has a Scottish influence, with strongly detailed phrases and an old-fashioned style of intonation. You’ll learn his version of “Greasy Coat” in this lesson. “Greasy Coat” is in A E A E tuning, and Bruce starts by playing the tune through a couple of times, before breaking the melody down for you phrase by phrase. He also shows you how Hammons often played thirds and sevenths slightly flat, and trilled the third. You’ll learn the melody of both the A and B parts in this video.
Try a sample lesson
The Old-Time Fiddle Subscription Includes:
$20/Month For One Course
Additional courses only $10/month each!   •   Save 20% with an annual subscription
Start Course
Get started now!
Use promo code BruceLand at checkout
and get your first month free or $20 off an annual subscription.
Ed Haley’s “Lost Indian,” Part 4: Double Stops
Bruce gives you some ideas for punctuating “Lost Indian” with double stops in this video. He also shows you a variation on the C part that uses some syncopated pulse bowing and different chords. 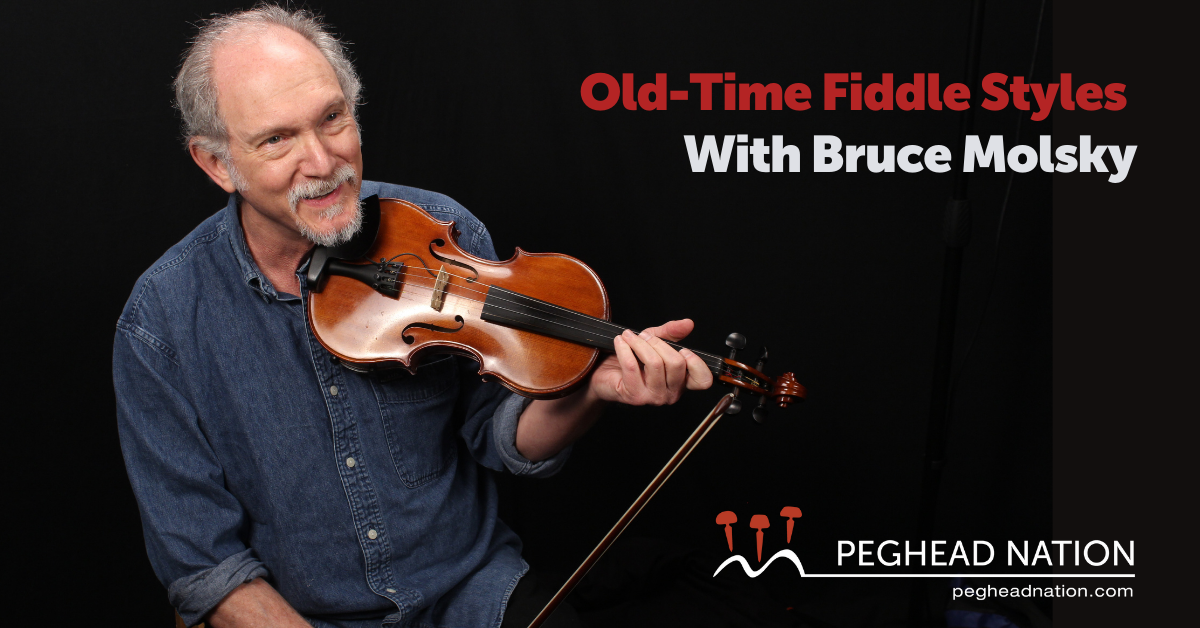 Oisín McAuley and Brittany Haas: “The Spey in Spate”
Oisín McAuley is one of today’s premier Irish fiddlers. A member of the band Danu, he recorded his solo debut, Far from the Hills of Donegal, for Compass Records in 2007. Born in County Donegal, Ireland, Oisín is currently living in Boston, where he’s the Director of Summer Programs at Berklee College of Music. He was recently a guest in Brittany Haas’s Fiddle Styles Workshop for Peghead Nation, where he taught the tune “The Road to the Glen” and demonstrated some of the ornaments and bowing characteristic of Irish fiddling. In this video, Brittany backs Oisín up on the reel “The Spey in Spate,” from Scottish composer James Scott Skinner.In her Fiddle Styles Workshop for Peghead Nation, Brittany hosts some of the best fiddlers on the planet, as they teach some of their favorite tunes and techniques. To learn from Brittany and her guests, enroll in the Fiddle Styles Workshop today.
Read More →
Sponsored By
Want to offer feedback or suggest a lesson? Need help with the site?
Contact Us
String School
● Courses
● Live Workshops
● Instructors
● Sample Lessons
● Play-along Tracks
● Notation Guide
● For Beginners
Learning Lab
● Workshops
● Advice
● Repertoire
Instruments & Gear
● Instrument Demos
● Vintage Vault
● New Gear
● Fine Lutherie
News & Reviews
● Recordings
● Events
● Breaking News
Featured Videos
● In The Studio
● Live Onstage
● Backroom
Partners
● New Products
● Inside Look
● Performances
● Partner Pages