Courses
Instructors
Sample Lessons
Play-along Tracks
Notation Guide
For Beginners
Notation Guide
Here's a simple guide to the music notation and tablature you'll find at Peghead Nation.
by Scott Nygaard
Standard Notation
Standard notation is written on a five-line staff. Notes are written in alphabetical order from A to G. Sharps and flats indicate the notes a half step between whole steps. A sharp raises a note by a half step, while a flat lowers it by a half step. Some notes can be indicated with either a sharp or a flat. For example the note a half step above A is A#, which is the same note as the note a half step below B, Bb. The entire 12-note chromatic scale used in Western notation is A, A#(Bb), B, C, C#(Db), D, D#(Eb), E, F, F#(Gb), G, G#(Ab). There are half steps between all letter notes except between B and C and between E and F.

Key Signatures
Every key has a different number of sharps (#) and flats (♭), which are indicated by the key signature at the beginning of the staff. All the notes that are sharped or flatted in the key signature are to be sharped or flatted in the music unless indicated by a natural sign (♮) next to the note. The key of C has no sharps or flats. The “sharp” keys are G (one sharp), D (two sharps), A (three sharps), E (four sharps), B (five sharps), and F# (six sharps). The “flat keys” are F (one flat), Bb (two flats), Eb (three flats), Ab (four flats), Db (five flats), and Gb (six flats). A natural sign (♮) effectively removes the flat or sharp from a note.

Note Duration and Rhythm
The duration of a note is determined by three things: the note head, stem, and flag. A whole note (see below) equals four beats. A half note is half of that: two beats. A quarter note equals one beat, an eighth note equals half of one beat, and a 16th note is a quarter beat (there are four 16th notes per beat). A triplet is a third of a beat (there are three triplets per beat).

Grace notes are represented by small notes with a dash through the stem in standard notation and with small numbers in tab. A grace note is a very quick ornament leading into a note, most commonly executed as a hammer-on, pull-off, or slide.
Time Signatures
The fraction (4/4, 3/4, 6/8, etc.) or “C” character shown at the beginning of a piece of music denotes the time signature. The top number tells you how many beats are in each measure, and the bottom number indicates the rhythmic value of each beat (4 equals a quarter note, 8 equals an eighth note, 16 equals a 16th note, and 2 equals a half note). The most common time signature is 4/4, which signifies four quarter notes per measure and is sometimes designated with the symbol “C” (for common time).
Tablature
In tablature, the horizontal lines represent the strings of the instrument: six strings for guitar and dobro, four for mandolin and ukulele, five for banjo. The first string is on the top. The numbers refer to the fret numbers on each string. Guitar, mandolin, and ukulele music has notation and tablature, which are designed to be used together: use the notation for rhythmic information and note durations and the tablature for the locations of the notes on the fingerboard. In fingerstyle guitar tab, notes with downward stems are to be played with the picking-hand thumb, while notes with upward stems are to be played with the fingers of the picking hand.

Notes connected with slurs (not to be confused with ties) in guitar, mandolin, or ukulele notation and tab should be played with a hammer-on, pull-off, or slide. Lower notes slurred to higher notes are played as hammer-ons; higher notes slurred to lower notes are played as pull-offs. Slides are represented with a dash. For two slurred notes connected with a slide, pick the first note and then slide into the second. If the dash has no slur above it, pick the second note as well, after sliding.

Dobro and banjo music has no notation, only tab. In this case, the tablature indicates the rhythmic information and note durations as well as the positions of the notes on the fingerboard. Slurs are indicated with an H (hammer-on), P (pull-off), or S (slide). Slides are also represented with a dash. In clawhammer tab, a drop-thumb is indicated with a T. In three-finger (bluegrass) banjo tab, picking-hand fingers are indicated with letters below the staff: i for the index finger, m the middle, and t the thumb.

Chord Diagrams
Chord diagrams show where the fingers go on the fingerboard. Frets are shown horizontally and strings are vertical lines. The line on the far left is the lowest string, and the line on the far right is the highest. The thick top line represents the nut. Numbers above the diagram are fretting-hand finger numbers. Dots show where the fingers go, an X indicates a string that should be muted or not played, and 0 indicates an open string. A numeral (preceded by fr.) to the right of a diagram indicates a chord played higher up the neck (in which case the top horizontal line is thin). Banjo chord diagrams do not show the fifth string, since it is rarely fretted.
Guitar Chord Diagrams 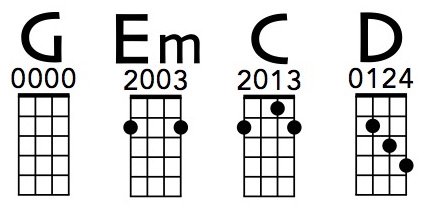 Capos
If a capo is used, it will be indicated at the beginning of the music, for example: Capo 2 means put the capo at the second fret. The standard notation and tablature is written as if the capo were the nut of the instrument. In guitar tab, chords are written in the same way: a tune capoed at the second fret and played using key-of-G fingerings and notation will show chords written in the key of G, even though the music will sound in the key of A. For banjo and dobro tab, the chords indicated represent how they sound. For example, a tune capoed at the second fret and played using key-of-G fingerings will have chords written in the key of A.
Tunings
Alternate guitar tunings are given from the lowest (sixth) string to the highest (first) string. For instance, D A D G B E indicates standard tuning with the bottom string dropped to D. Standard notation for songs in alternate tunings always reflects the actual pitches of the notes.
Repeats
Navigation symbols such as repeats, DS al Coda, DC al Fine, To Coda, etc. can be the most confusing parts of a piece of music. Repeat symbols are placed at the beginning and end of the passage to be repeated. Ignore repeat symbols with the dots on the right side the first time you encounter them; when you come to a repeat symbol with dots on the left side, jump back to the previous repeat symbol facing the opposite direction (if there is no previous symbol, go to the beginning of the piece). The next time you come to the repeat symbol, ignore it and keep going unless it includes instructions such as “Repeat three times.” A section will often have a different ending after each repeat. The example below includes a first and a second ending. Play until you hit the repeat symbol, jump back to the previous repeat symbol and play until you reach the bracketed first ending, skip the measures under the bracket and jump immediately to the second ending, and then continue.

DS stands for dal segno or “from the sign.” When you encounter this indication, jump immediately to the “sign” (shown above the third measure in the example above). DS is often accompanied by al Fine or al Coda. Fine indicates the end of a piece. A coda is a final passage near the end of a piece and is indicated with Φ. D.S al Coda tells you to jump back to the sign and continue on until you are instructed to jump to the coda, indicated with To Coda Φ. DC stands for da capo or “from the beginning.” Jump to the top of the piece when you see a DC. DC al Fine tells you to jump to the beginning of a tune and continue until you encounter the Fine indicating the end of the piece (ignore the Fine the first time through).
Music Notation PDF Download 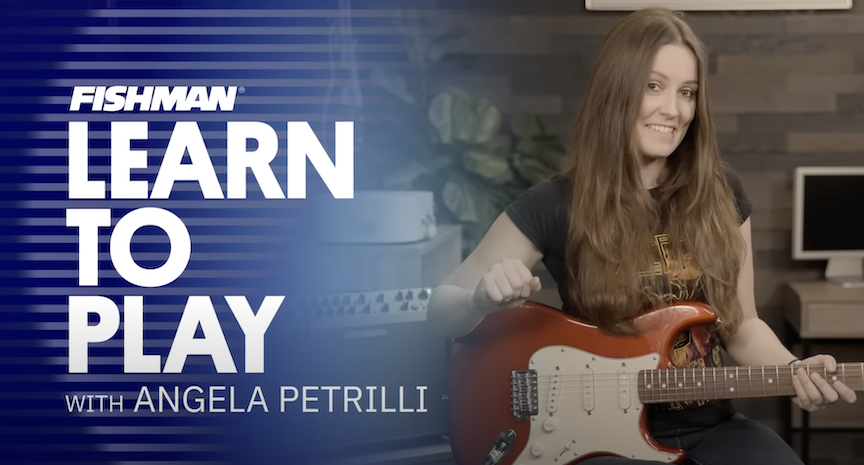