This lesson is part of the course Roots and Bluegrass Rhythm Guitar with Scott Nygaard.
Get immediate access to this lesson and all of the lessons in this course when you subscribe.
Start Course
Browse Courses
Watch Course Introduction Video
About This Course
Learn the essential techniques of roots and bluegrass rhythm guitar by playing classic and contemporary songs, with flatpicking technique tips and strums, bass runs, and fills.
Try a Sample Lesson
Some Old Day
This great Flatt and Scruggs song was recorded by JD Crowe and the New South on their classic self-titled album, with Tony Rice singing lead. It's a great example of a medium tempo bluegrass song played with a country swing feel. You'll learn a strum pattern that helps accent the swing feel, as well as some bass runs to use at the ends of phrases. Scott plays the song in D and looks at some different ways to finger the A and A7 chords. Finally, he sings the whole song through so you can play along with him.
Try a sample lesson
The Roots and Bluegrass Rhythm Guitar Subscription Includes:
$20/Month For One Course
Additional courses only $10/month each!   •   Save 20% with an annual subscription
Start Course
Get started now!
Use promo code ScottLand at checkout
and get your first month free or $20 off an annual subscription.
Green Pastures
The great bluegrass singer and banjoist Ralph Stanley passed away recently. His self-described “mountain music”  was a major influence on the development of bluegrass, both through his work with his brother Carter as the Stanley Brothers in the 1950s and later as a solo artist and with his own band, the Clinch Mountain Boys. In this lesson, you’ll learn the gospel song “Green Pastures,” also called “Going Up Home to Live in Green Pastures,” which was introduced to the bluegrass world by Ralph’s recording, and has also been recorded by Emmylou Harris and Ricky Skaggs, Larry Sparks, David Grisman, and others. It’s a fast waltz with some unusual phrasing. Scott starts by showing you a couple of variations on the waltz strum pattern that allow you to drive the rhythm along. He also points out the phrasing of the melody, in which each of the first three phrases consist of three bars of 3/4. You’ll also learn a couple of bass runs to play at the end of the verse/chorus on G chord and halfway through the verse/chorus on the D chord. Scott finishes by singing “Green Pastures” through so you can sing and play along with him. 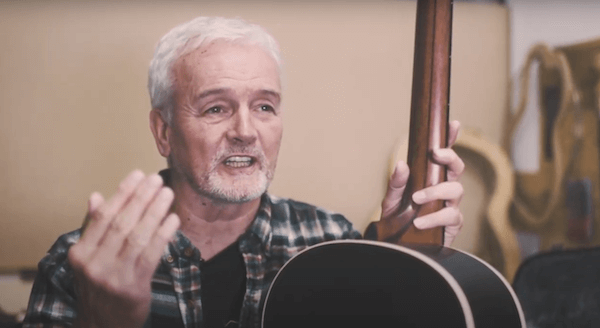 George Lowden on Brazilian Rosewood
The founder of Lowden Guitars talks about the beauty of the rare and regulated species.
Read More →
Guitar Videos