Courses
Instructors
Sample Lessons
Play-along Tracks
Notation Guide
For Beginners
Contemporary Bluegrass Banjo
with Wes Corbett
Start Course
About This Course
Learn the style of contemporary three-finger banjo used by Béla Fleck, Noam Pikelny, Ron Block, and others. With lessons on single-string and melodic style, fingerboard theory, improvisation, and more. For intermediate to advanced players.
Try a Sample Lesson
VARIATIONS ON “CRIPPLE CREEK”
Wes shows you some ways to vary the melody of “Cripple Creek” and introduces the concept of “melodic style” banjo. Melodic-style was invented by banjoist Bill Keith, who devised a way to play linear note-for-note melodies where you never play the same string consecutively. Wes walks you through the variations phrase by phrase, pointing out how each variation relates to the original melody.
Try a sample lesson
Meet the Instructor
Wes Corbett 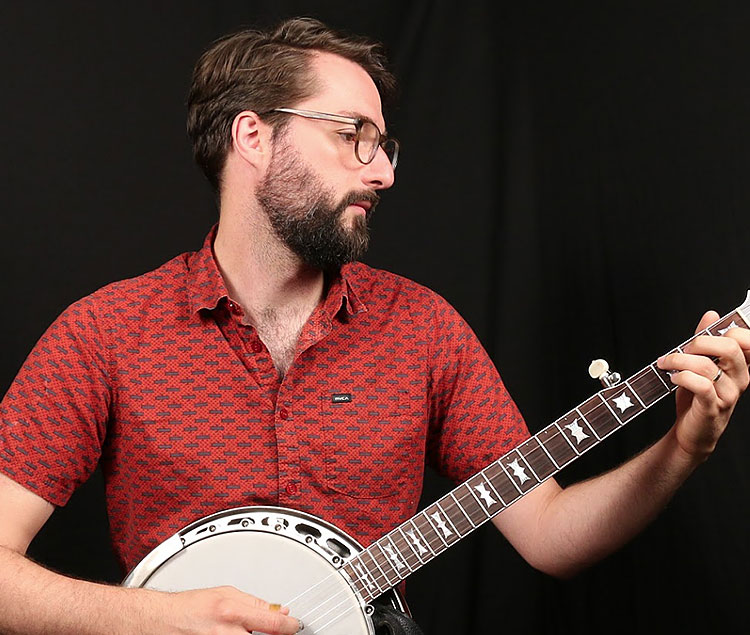 A banjo player of uncommon grace and facility, Wesley Corbett began classical piano at the age of two. He began playing banjo in high school and has spent the last 17 years studying, touring, and teaching. Wes has recorded and performed with numerous musicians, including Joy Kills Sorrow, the Bee Eaters, the Biscuit Burners, the David Grisman Quintet, Molly Tuttle, Sierra Hull, Sarah Jarosz, and many others. After a few years touring with the Molly Tuttle Band, he recently joined the Sam Bush Band.
Instructor Page
Peghead Play-Along Tracks
Peghead Nation is creating a library of accompaniment videos (and downloadable MP3s) for songs and tunes that are taught on the site, classics that you'll find at many jams and picking parties. As a subscriber, you have access to this library and can use the tracks to practice playing tunes and songs at a slow or medium tempo with guitar accompaniment. New songs will be added regularly.
The Contemporary Bluegrass Banjo Subscription Includes:
$20/Month For One Course
Additional courses only $10/month each!   •   Save 20% with an annual subscription
Start Course
Get started now!
Use promo code WesLand at checkout
and get your first month free or $20 off an annual subscription.
Contemporary Bluegrass Banjo Course Outline
WES CORBETT’S HAWTHORN TOP-TENSION BANJO AND GEAR

ROLL PATTERNS
If you’re taking this intermediate to advanced level banjo course, we assume you know some basic roll patterns, but to make sure you know the most important roll patterns, and the ones you’ll use most in this course, Wes shows you three basic patterns, starting with the forward roll. He shows you the forward roll starting with the thumb as well as on the index and middle fingers. He follows that with the backward roll (starting on all three fingers), the thumb alternating roll, and the “zigzag” roll.
CHORDS
To become fluent in finding and creating chord shapes, it’s important to understand how chords are created, so Wes starts this lesson by talking about how basic major chords are built. Then he shows you three major chord shapes, giving you advice on fingering each of the shapes. He also gives you an accompaniment pattern to play with the picking hand, often known as vamping, and shows you how to move the shapes to different places around the neck. You’ll also learn about the seventh chord, which has four notes—adding a seventh to the root, third, and fifth of the major chord—and the minor chord, in which the third of the major chord is flatted.
VARIATIONS ON “CRIPPLE CREEK”

In this lesson, Wes give you lots of ideas on creating variations to standard arrangements of a tune, using the banjo classic “Cripple Creek.” For those who may have never learned “Cripple Creek,” Wes provides a basic Scruggs-style version of the tune that includes the essential techniques of slides, pull-offs, and hammer-ons. The he shows you some ways to vary the melody of “Cripple Creek” and introduces the concept of “melodic style” banjo, which was invented by banjoist Bill Keith, who devised a way to play linear note-for-note melodies where you never play the same string consecutively.

Wes introduces the concept of harmonized scales and explains how they are essential to learning to play melodies on the banjo, or any instrument. He shows you to play a major scale starting on the root and starting on the third and combine them to create a major scale harmonized in thirds. He walks you through the thirds on the second and third strings, pointing out how the shapes of the thirds change as they move up the neck, and how to play them within a roll pattern. You’ll also learn the harmonized scale in thirds on the top two strings and a version of “Mary Had a Little Lamb” using these shapes with the melody on the top string.

HARMONIZED SCALES IN C AND D

Single-string style on the banjo is a way of emulating flatpicking or single-line melody playing, using your thumb for downstrokes and index finger for upstrokes. The style was pioneered in bluegrass by Don Reno in the 1950s and developed by Béla Fleck and other contemporary banjo players. In this lesson, Wes shows you the basics of the technique and gives you a series of exercises with various string crossings and groups of four, three, and two eighth notes. You’ll also learn the fiddle tune “Leather Britches,” with the first part played single-string style, and the second part melodic style.

In this lesson, Wes shows you how he uses guide tones in his chord voicings. Guide tones are the most import notes in a chord, the notes that really define the chord and create a sense of movement from chord to chord. He shows you how to construct two voicings of seventh chords using the third, seventh, and fifth of the chord, and how to use them to play Earl Scruggs’s “Foggy Mountain Special” and “Salty Dog Blues.”

In the forward-roll style of banjo playing, melodies are played primarily by the index finger on the inside strings—second, third, or fourth strings—using forward and backward rolls. It’s a style you can hear in the playing of contemporary banjo players like Ron Block, who plays with Alison Krauss and Union Station. Wes gets you started with an exercise that combines the G major scale played entirely on the third string with forward rolls, followed by similar exercises using the G major scale on the second and fourth strings. He also shows you how to play the folk standard “You Are My Sunshine” using the forward-roll style.

“Brushy Run” is one of Wes’s favorite old-time fiddle tunes, and his arrangement follows the fiddle melody exactly, which means that there are a few tricky sections for both hands. It’s in the key of G, and Wes plays it mostly melodic style with a touch of single string.

ALTERNATIVE ROLLS
In this lesson you’ll learn a couple of rolls that will be familiar to fans of Béla Fleck, Tony Trischka, Alison Brown, and other contemporary bluegrass banjo players. The first is the bounce roll, which involves bouncing off a drone string (which can be an open or fretted string) and playing double stops with the index and middle fingers. After explaining the bounce roll, Wes gives you a number of exercises using the harmonized major scale with different string sets. The Shelton roll is named after banjoist Alan Shelton and has a tricky maneuver in which you play the first string with your middle finger and then with your index finger. To practice it, Wes gives you some exercises that use the harmonized major scale, diatonic triads, and the circle of fifths.
ROLLING THROUGH CHORD CHANGES
In this lesson, you’ll learn how to roll through chord progressions. Wes starts by talking about the Nashville number system, the harmonized major scale, and the most common chords used in bluegrass. Then he shows you a couple of common rolls used to roll through chord changes and gives you some examples of chord progressions to use them on.
SINGLE-STRING EXERCISES
Wes gives you some great single-string exercises using the 3–3–2–3 fingerboard mapping positions. He starts by showing you a “half position” for playing in G that corresponds to the seventh position in the fingerboard mapping scheme, and then shows you a common melodic pattern exercise in this position. Then he shows you two other half positions in G, which correspond to the third and fourth positions in the fingerboard mapping scheme, and the same melodic pattern exercise in both of those positions. Wes also gives you another couple of pattern exercises: a thirds in doubles pattern that corresponds to the harmonized scale shapes you’ve previously learned and a scale pattern played on the top two strings in which you shift upward through all the patterns and pick with all three fingers.
CHINQUAPIN HUNTING

In this lesson, you’ll learn the traditional fiddle tune “Chinquapin Hunting” in three keys: D, G, and C, all in G tuning. The arrangements primarily use melodic style, and these are the three most commonly used keys for playing in melodic style, so it’s important to be comfortable in all of these three keys. “Chinquapin Hunting” is a relatively simple tune, with a lot of repetition, so learning it in three keys is not as daunting as it might be with a more complicated tune.

JD CROWE’S “COME BACK TO ME LITTLE DARLING” BREAK

JD Crowe is one of the most influential Scruggs-style banjo players of the last half century, and is particularly great at playing breaks to bluegrass songs. In this lesson, you’ll learn his break to the song “Come Back to Me Little Darling” (also called “Come Back Darling”) from the Bluegrass Album Band recording. Wes starts by talking about the subtleties and timing of some of the hammer-on and pull-off licks and then walks you through the solo measure by measure.

Unlike an instrument like an acoustic guitar or mandolin, all the parts of a banjo are put together with bolts and screws. This means not only that it’s easy for banjo players to do their own setup work and adjustments, but that parts can become loose, especially when traveling. So it’s important to know how to fix minor problems. Wes goes through some basic setup issues (and shows you how to address them), like bridge position, head tension, truss rod adjustment, tailpiece height, using capos, and more.

An original tune from Wes’s new solo album, “Mary Evelyn” is named for his grandmother. It’s in the key of E major and combines melodic and single-string styles as well as roll patterns, in particular a t-i-m-t-i-t-m-i pattern.